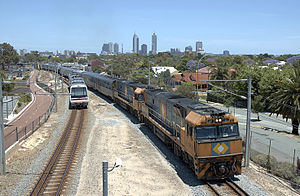 Today the Western Australian Government announced that Chinese state owned Huawei would be contracted to provide communications for their rail network.  Many intelligence and advisory agencies have previously warned against Huawei begin given access to any infrastructure or critical service networks – but the WA Government maintains that this is only for 4G voice communications.

The next stage of this upgrade however would be to allow this network to actually control all of the rolling stock, and this could be a problem that would need to be referred to Signals or the Cyber Security Directorate.