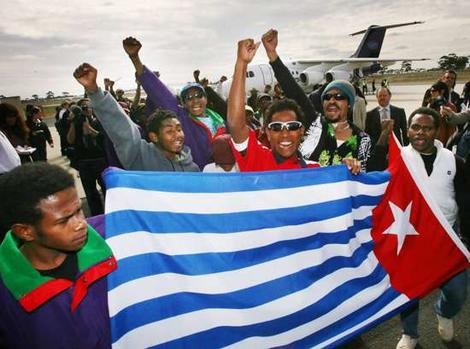 After annual independence protests took place across West Papua this weekend, reports have emerged of the increasingly volatile relationship between the Papuan independence activists and Indonesian security. Victor Yeimo- the chairperson of the West Papua National Committee (or KNPB) was arrested on Saturday, along with two other leaders of the organization, ahead of scheduled protests.

Reported to have been released yesterday, concerns are being raised as he is yet to be seen or heard from. Many, including  Jim Elmslie, from the West Papua Project fear that he could be dead – suffering a similar fate to that of his predecessor, former KNPB leader Mako Tabuni.

Download Audio
Produced By Caitlin Gibson
Featured in storyJim Elmslie - Dr. Jim Elmslie is founding Co-convener of the West Papua Project at the Centre for Peace and Conflict Studies, the University of Sydney.
Category
Tags
Arrow Back to archive
Arrow Back to Monday
Share Facebook Twitter Twitter Tumblr
Other stories from this day:
You might also be interested in: