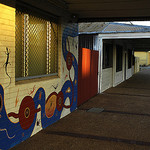 Despite the Closing the Gap campaign launching in 2008, Aboriginal and Torres Strait Islanders can still expect to live ten to seventeen years less than the average Australian. While the government has committed to closing this gap, and building equality in health, education and employment, advocacy groups are concerned the upcoming budget won’t do enough to meet these goals. They say many organisations face funding cuts, and resources are being allocated to mainstream services instead. (Image by Mark Roy from flickr.com)