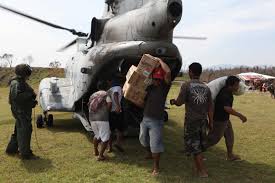 The devastation and human suffering unleashed on the central Philippines by Typhoon Haijan is presenting a massive challenge to international aid agencies. This is despite the lessons learnt from a decade of earthquakes, tsunamis and other disasters of unprecedented scale.

Efforts to relieve the suffering of the millions of people affected by Typhoon Haiyan for a variety of reasons have been painfully slow. But some progress is being made providing food, water and medical aid to the half-million people displaced. International assistance is beginning to flow to areas of need but there are still areas that have received no help.