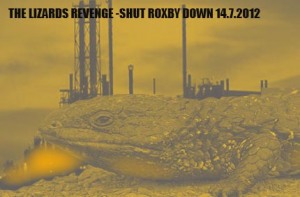 Sleeping underneath the ground, there is an old lizard known as Kalta the sleepy lizard. The lizard ain’t so sleepy anymore. The Federal Government approved the expansion of the Olympic Dam uranium mine in Roxby Downs in October 2011, to make it the biggest uranium mine in the world. Local Arabunna elder Kevin Buzzacott says Kalta the lizard is angry and wants revenge.

He’s calling the people of the world to help the lizard shut down the mine. And people from around Australia are answering his call. They’re heading to Olympic Dam for a weekend of protest called the Lizard’s Revenge… but the police are making it hard for them.