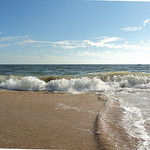 Perhaps unknown to many, the sea has long played a prominent role in Aboriginal culture. As a prominent, in fact, as the land. This fact is now on display in a new permanent exhibition at the Australian Museum in Sydney. Called Garrigarang sea country, the collection consists of 300 objects and works, both traditional and commissioned pieces. Elders hope the new gallery will enlighten Indigenous and non-Indigenous alike, on the role of the sea in Aboriginal Culture.