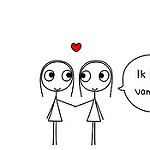 A frequent argument used by opponents of same-sex marriage is that the rights of a child are compromised in families without a mother and a father. The debate on the issue is on-going after Prime Minister Tony Abbott’s refusal to allow a conscience vote on same-sex marriage prior to the 2016 federal election. What does the research actually say, and is the focus on children even warranted or appropriate in this debate?

Download Audio
Produced By
Featured in storyRodney Croome - National Director of Australian Marriage EqualityDr Simon Crouch - Honorary research fellow at the University of MelbourneSophie York - Spokesperson for Marriage Alliance AustraliaMaya Newell - Director of the Gayby Baby film
Category
Tags
Arrow Back to archive
Arrow Back to Friday
Share Facebook Twitter Twitter Tumblr
Other stories from this day:
You might also be interested in: