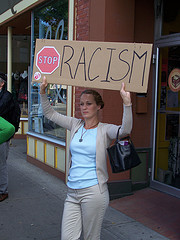 Lately in the press, racism abuse is seen in public transport, or anywhere. Now, with the increased use of social media and technology, people are spreading the word on racist rants. This phenomenon has brought awareness on people and started to step in to racial comments. Evidence from social studies has shown racists are a minority in Australia, and multiculturalism has helped on this. However, campaigns are the best way to continue fighting on racism as there is still a gap to fill. The National Union of Students will launch a campaign celebrating diversity across Australian universities.