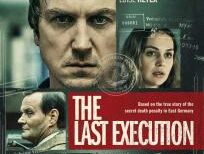 Based on the crumbling of the communist regime back in 1989, the film explores the last trial and execution of Engineer Werner Teske, when he was denounced and accused of plotting to defect to West Germany.

Franziska Stunkel is the director of the film and the Wire spoke to her about the significance of the story she has told in this movie.