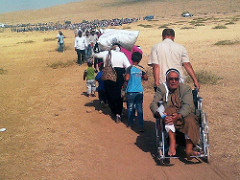 The terrorist attacks in Paris over the weekend have raised concerns over the resettlement of Syrian refugees across Europe and the world following the discovery of a Syrian refugee passport near the body of a suicide bomber. As investigations continue, many in Europe are questioning German Chancellor Angela Merkel’s open-door policy amid fears of IS infiltrators among the throng. Here in Australia there have also been calls for a review of Australia’s acceptance of 12,000 Syrian refugees by this Christmas. But are they justified?