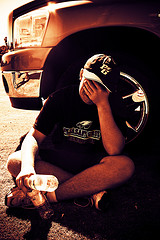 Depression is taking its toll in Australia. Nearly 2000 Australians will commit suicide each year due to depression problems, becoming a higher rate than cancer death rate. Men don’t speak about their problems, causing a deeper depresion. Now, in Brisbane, a support group is helping the community to literally combat this condition.

Black Dog Boxing is a group opened by Rodney Bukuya, who experienced depression himself, and realised he wanted to help other people who are passing through the same journey as him.